Jason Momoa’s portrayal of Aquaman, hitting theaters tonight, signifies the end of Aquaman the quasi Ken Doll with an ever-changing back story, and the beginning of Aquaman the badass. In the past it would be difficult to find a kid that prefered Aquaman to other members of the Justice League. Depictions like the one you see above, coupled with multiple origin stories, made it hard for kids to connect with him. Tonight, director James Wan sets the record straight. But before we say goodbye to the old Aquaman, let’s take a look back at Aquaman’s history and how we got to where we are today.

During the Golden Age of comics, Aquaman first revealed his origins to us in a simple paragraph. He described himself as the son of a famous undersea explorer that had discovered Atlantis. He goes on to explain how his father used the lost records and technology of Atlantis to transform Aquaman into a superhero. However, this origin story would change dramatically during the Silver Age of comics.

In this time period writer Robert Bernstein established that Aquaman’s name was Arthur Curry. He explains that Arthur was the son of a lighthouse keeper named Tom Curry, and an Atlantean named Atlanna. As a child Aquaman discovered his abilities to communicate with sea life and survive underwater. He eventually developed to become the protector of Earth’s oceans. What he did not know is that once again his back story would develop into something different.

The Modern Age origin story retains a lot of what we had learned about Aquaman from the Silver Age with more detail. In this era, writer Robert Loren Fleming represents Aquaman as the son of a mysterious Atlantean wizard named Atlan and Queen Atlanna. Blond hair was seen as a curse to the suspicious Atlanteans so Aquaman was left abandoned. Eventually Aquaman would be discovered as a feral child by a lighthouse keeper named Arthur Curry, who named Aquaman “Arthur Curry” after himself. But when the lighthouse keeper disappears one day Aquaman sets off for adventure, leading to many of the Aquaman stories we know and love.

Aquaman’s origin story goes through one last rendition years later in the Brightest Day event, where he revealed to Aqualad that the narrative portrayed during the Silver Age is accurate. Aquaman is the half-human son of Tom Curry and an Atlantean queen. This is the narrative the Aquaman movie will be affirming tonight. For the rest of the story you will have to catch it in theaters.

Rubie’s is proud to offer a full collection of Aquaman costumes and accessories. With this fresh take on an old classic, Aquaman is bound to be a very popular dress up option for people of all ages. Take a look at the full collection here and enjoy the movie!

If someone asked you to describe Spider-Man, what would you say? Most would say he wears a blue and red suit, and he uses his proportionate strength and speed of a spider to fight crime. A fitting description for some of those web slinging heroes in the Marvel Universe, but what about the others? That’s right, Peter Parker is not the only Spider-Man to consider, there is a whole multiverse of spider-like heroes out there. Hitting theaters tomorrow, Spider-Man: Into the Spider-Verse, plays on this concept of crime fighting collaboration amongst spidey powered heroes from multiple dimensions. To prepare you for tomorrow, here is a quick recap on the history and characters of the Spider-Verse.

The concept of a multiverse is nothing new. There are an infinite number of timelines accounting for an infinite number of realities all vaguely similar to one another. The same rules apply to the Spider-Verse. In some realities Peter Parker is almost identical to the Spider-Man most of us are familiar with. In others Peter Parker might not be the one who was bitten by a radioactive spider at all. In certain circumstances where the bad guys are just too powerful to defeat alone, some of these spider-heroes can break their interdimensional barriers and join forces. Here are some of the main characters of the Spider-Verse that frequently appear when the spidey squad assembles. 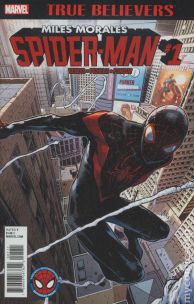 Miles Morales – In Miles’ universe, Peter Parker gave his life in a battle against the Green Goblin. Miles took on the role of Spider-Man in Peter’s place and fights for the same values. Now Miles has joined the traditional Marvel Universe and receives guidance from that world’s Peter Parker.

Spider-Gwen – On Earth-65, Peter Parker is not a hero at all. In this universe Gwen Stacey is bitten by the spider and Peter Parker is her jealous boyfriend accidentally turned lizard monster. As a high school student and daughter of the police chief, Gwen struggles to balance her civilian life with her hero life.

Spider-Man Noir – With an infinite number of universes, there are bound to be some pretty dark realities. This is where Spider-Man Noir comes from. In a Great Depression-era world riddled with crime, this version of Peter Parker sticks to the shadows and totes a twin set of pistols.

Spider-Ham – Peter Porker’s character is simple. He’s just a spidey powered pig from a universe where all the characters we know and love are anthropomorphized versions of themselves.

There are many, many more. Thankfully, Marvel began connecting these characters in 2014 when they brought together hundreds of spider characters to protect the Web of Life and Destiny. Since the genesis of the Spider-Verse, the concept has gained popularity. The potential for spider people to team up became the crux of the animated Ultimate Spider-Man, and various Spider-Man video games have toyed with the same premise. Now the Spider-Verse is hitting the big screen, allowing more people to become familiar with a much larger Marvel world full of possibilities and we can’t wait to see what happens next!

Winter officially starts in 22 days bringing cold and snowy weather. For most of us this entails a quicker pace when walking to and from the car, but for those who are homeless winter spells hardship. Warm clothes can be their only defense against the elements and for those who lack warm clothes there is no defense. That is why this winter Rubie’s is teaming up with Long Island Coalition for the Homeless to conduct a coat drive.

Getting involved is simple. At Rubie’s, we have set up a series of collection bins throughout our Melville office adorning the sign you see above. The bins will be in place until December 20th, just in time to be distributed for Christmas. We encourage you to do the same! Get in contact with the Long Island Coalition for the Homeless and see if they can collect your donations. In the meantime start spreading the word that you will be collecting warm clothing for the homeless this December and start encouraging others to follow your lead. Happy holidays.