Shazam is the #1 Movie in the World

“Shazam!” is officially the number one movie in the world after its opening weekend, earning over $53.3 million according to Comscore. That makes the film the third nonsequel comic-book hit in a row for Warner Bros. With this success, Warner Bros. have re established themselves as a leading superhero studio.

“We really want these movies to stand on their own, with filmmakers best suited to the characters,” Toby Emmerich, chairman of the Warner Bros. Pictures Group, said to The New York Times, “We’re all feeling deservedly really good.”

New Line, a division of Warner Bros. made the film for about $100 million, roughly 40 percent less than most superhero movies. Considering that Shazam has raked in about $156 million worldwide, it’s clearly setup to receive a big return and that “really good” feeling described by Emmerich is justified.

The film tells the story of a teenage boy that transforms into an adult superhero just by saying the word, “Shazam”. “New Line always thought that ‘Big’ as a superhero movie was a great idea, a way to make the genre feel fresh and different,” Emmerich said to The New York Times. The levity (pun intended) of this movie also infers that Warner Bros. will continue to depart from the darker superhero universe envisioned by Zack Snyder.

Given the success the film has already seen, we are confident that “Shazam!” costumes will be a huge hit with all age groups this year. Take a look at our full Shazam Collection here and let us know what you think in the comments below. 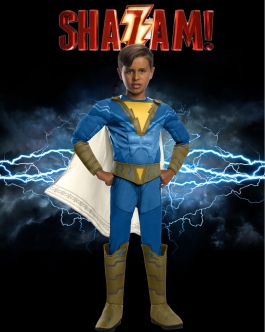 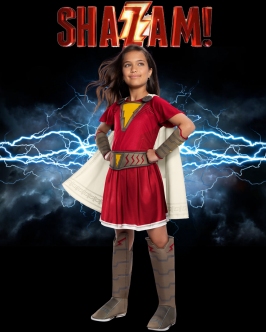 Family owned and operated for over 65 years, Rubie’s Costume Company is the largest designer, manufacturer and distributor of Halloween costumes and accessories in the world! We remain true to our founders’ vision by continually offering innovative products and a variety of styles for the whole family to enjoy, including pets! With the 3rd generation playing such an integral role in our future, we’re confident Halloween with Rubie’s will continue to flourish for years to come. View all posts by Rubie's Costume Company